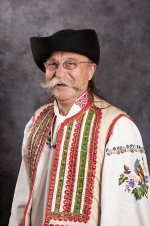 He was born on 5. 2. 1947 in Východná. Janko was, despite his small height an unique soloist in SĽUK (Folk Art Ensemble). He got to stage at the age of four. He became a laureate of folk festivals in Východná in 1958. He became a soloist of SĽUK in 1963 and led by maestro choreographer Kubánka, he danced through Slovakia to overseas. He stopped dancing after 27 years but remained faithful to folk dance. As a director of folklore section of Spectrum ART, together with Dušan Kollár and Ján Palovič, support folk dance, genuineness of folklore and heritage of fathers. Common projects, participations in folk festivals, music and dance commemorative programs of SĽUK and cooperation with the Mountain Orchestra are filling their joint activities. Janko Petrenka is the mascot of Spectrum ART, his endless energy, vitality and positive thinking enriches us all. 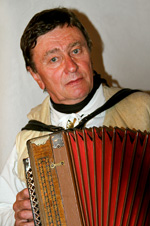 He was born on 18. 8. 1947 in Poniky. He is a virtuoso multi-instrumentalist of folk instruments, singer, dancer, folklorist and ethnologist. He grew up on folk music and customs, and thanks to his parents he sees the life through folk song. At the age of 14, he began to dance in the ensemble Urpín in Banská Bystrica. Later he visited country to gather jewels of folk verbal literature which were then presented in radio and television. Janko Palovič reaped his knowledge and talent in a professional ensemble Folk Art Ensemble (SĽUK – 26 years), where they created an inseparable couple Palovič-Petrenka. Ján Palovič travelled whole world with SĽUK and then the rest of the world with puppet theater of maestro Anderle. Dušan Kollár with Palovič and Petrenka did not miss even one folklore festival in Slovakia in recent years. Janko Palovič with his bagpipes, accordion and pipe, is the highlight of every party or social event of Spectrum ART Association. 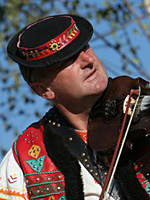 Juraj Pecník, music virtuoso of violin playing, teacher and folklorist, born in Čerín near Banská Bystrica, founded FM Pecníkovci in 1977 and later in 2004 “Vrchársky Orchester ” (the Mountain Orchestra) where met several musical motifs from fascinating region – Podpoľanie. He put together not only a coherent musical ensemble but also singers, soloists, dancers and also a proud group of “first violinist” famous names. Juraj Pecník prepared one and half hour long program “Mountain parade” with which he has a great success at home stages in Terchová, Očová, Hrušov and Východná. His performance engaged the attention in the festival Bažant Pohoda 2009. Mountain Orchestra, which is slowly rejuvenating by second generation, cooperates with Terchovská music of Mucha brothers but also with the Diabolic violin of Berky Mrenica, SĽUK and Lúčnica. Folk music of Juraj Pecník did not miss any bigger event organized by Spectrum ART Association and did not either on 14th International trade fair of Monaco.