Club S.A.M.C. (Spectrum Art Members Club) was founded on 28.5.2002 on the occasion of His Majesty Hereditary Prince Albert Grimaldi arrival who has also inaugurated the club. Membership in the club is subject of strict selection, the members are nominated and accepted by Arts Council. Club S.A.M.C. associates supporters, friends and favorers of Spectrum ART within it. The club organizes various social events whereby it uses its own premises in Bratislava: Billiard club Panská 4 and Café Štefánka. The club has had many activities outside of Bratislava, particularly in Banská Štiavnica and Košice. Club president is Kamil Peteraj and the first honorary member of the club is Rudolf Schuster. Honorary membership was further accepted except of Prince Albert Grimaldi, also by HE Stéphane Valeri, Chairman of the Parliament of the Principality of Monaco and HE Christina Noghés-Menio, the Honorary Consul of Slovak Republic in the Principality of Monaco, as well as by other members of the delegation – the highest representatives of the Principality of Monaco. Other honorary club members are: Jozef Klimko, Tibor Bártfay, Arpád Račko, Ján Kulich, Ignác Bizmayer, Janko Petrenka, Ján Palovič, Juraj Pecník, Juraj Kubánka, Štefan Nosáľ, Palo Hammel. 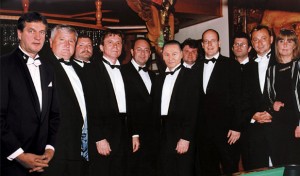 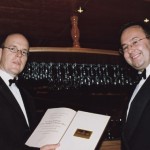 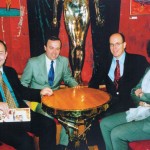 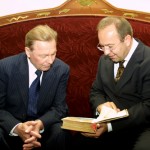 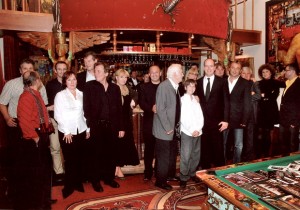 Second informal meeting with HM Prince Albert Grimaldi with the presence of HE Honorary Consul of Slovak Republic Christina Noghés-Menio, on the occasion of taking the price EKOTOPFILM 2006

He was born on 18.9.1945 in Bratislava. In 1964 he graduated the studies of violin playing on the Conservatory in Bratislava and in 1970 graduated the study of Theatrical dramaturgy at the VŠMU in Bratislava. He was dramaturgist of New Scene (Nová scéna) in the years 1970 -1980 and since 1980 he is a free-lancer. He is devoted to poetry making, but is generally known for popular songs of eighties and nineties lyrics for Palo Hammel, Marián Varga, Marika Gombitová, Miroslav Žbirka and Robo Grigorov. He published his first poem in 1964 and a year later he debuted with a collection “Orchard of winter birds”(Sad zimných vtákov). In addition to poetry, he is dedicated also to film, musical and translations. He shortly worked as a creative director in advertising. He won numerous awards for his poetry collections and lyrics. He acts as President of the club S.A.M.C. in the Community Spectrum ART.

The first honorary club member of S.A.M.C. HE Rudolf Schuster

Rudolf Schuster was born on 4.1.1934 in Medzev near Košice. He was educated in Košice where he studied SPŠS (industrial school) and in 1959 continued his studies at the Technical University in Bratislava, the Department of engineering. Later he went to Mining Faculty of Technical University in Košice where he completed his postgraduate and acquired the degree of CSc. His work career began in Bratislava but later he worked in Východoslovenské Železiarne. His political career was developing since 1974, and in 1983 he became mayor of Košice for the first time. After the revolution of 1989, he was Slovak National Council Chairman, Ambassador of Czechoslovakia in Canada, worked in Foreign Office in Bratislava. In the period 1994-1999 he worked as a Mayor of Košice for the second time and at the same time as a member of the National Council of the Slovak Republic. In direct election in 1999 was elected President of the Slovak Republic. He is an honorary citizen of many European cities and Dr. Honoris Causa of many universities. Rudolf Schuster is devoted to history, writing, travelling, collecting technical antiques, documentary filmmaking, photography and filming. He adopted honorary membership of the club S.A.M.C. in 2002 as the first one. His rich experience as well as personal charisma is a contribution to the club.

Tibor Bártfay-doyen of the group

He was born on 12.5.1922 in Nitra into a sculptural family. He entered Slovak art scene in early fifties and he joined modern pro-European statuary with his artistic creation. He is one of the most important Slovak artists, whose work greatly impressed also abroad. He exhibited at home but also in the Czech Republic, Germany, Egypt, France and USA. His sculptural style is nationally Slovak but clear for world too. Since 1973, an Award of Cyprian Majerník belongs to him. He is listed among the most important figures of world culture and the art since 1997. In 1985 he was awarded UNESCO Award and in 1986 World Council of Peace Medal. On the occasion of his seventieth birthday, in 1992, he was given Cross of the President SR I. Instance. He became a doyen of Spectrum of ART Association upon general appreciation of his human and artistic qualities.

He was born on 14.3.1958 in the Palais Princier in Monaco. He is the son of Prince Rainier III. and Grace Kelly. He has two sisters: Caroline, Princess of Hanover and Princess Stéphanie. After graduating from high school in 1976, he stayed shortly in New Hampshire and later in 1977 he enrolled into Amherst College in Massachusetts, USA. During holidays at the University, he travelled across Europe and the Middle East, he was a keen sportsman, took part in an exchange program with the University of Bristol. In 1982 his mother, Princess Grace died in a tragic car accident. He is a member of the Olympic Committee since 1985. His sports activities resulted in the participation in the Winter Olympics as a bob sledge team member. He participated in expeditions to the North Pole, is Vice-president of American charitable association founded by his mother, Princess Grace. On 31. March 2005 he took over the duties of his father because of his bad health state and after coronation on 19.November 2005 became a sovereign of Monaco. As Prince Albert II., he continues in the policy of his father, is a member of the World Economic Forum. In 2006, Albert II. founded the foundations to support sustainable conditions on Earth’s climate, energy resources, biodiversity and water resources. He was awarded the prize of Eagle in the U.S. in 1996 and the prize of Roger Revell for his work in the field of environmental science in 2009. Besides many statesmen activities is Prince Albert II also a member of Monaco delegation to the United Nations, the President of Red Cross in Monaco and the President of many sports organizations. He supports artists, arts and participates in many charity events and virtually all important events in the territory of Monaco happen under his patronage. He met with Slovak art for the first time at 11th International Art Fair in 1999. He is a big supporter of Slovakia, as confirmed during his first visit to Slovakia in 2002. He has taken membership in the club S.A.M.C. during his first visit. During his second visit, when he took the prize Ekotopfilm 2006, he again met with us in the club S.A.M.C.

Chairman of the National Council of Monaco, Stéphane Valeri was born on 1st March 1962 in Monaco. He is a significant political figure of Monaco. After graduating from the Lyceum of Monaco and studying in the Ecole des Hautes Etudes Commerciales in Paris, studied in the U.S., Massena High School in Manchester. Stéphane Valeri is a graduate of the School of Management (EAP), and in 1986 he founded Youth Association of Monaco (AJM) which he chaired by 1993. In 1987, he became Deputy director of the Société des Bains de Mer Monaco for the Sales department and later at the Department of advertising. Later he founded a commercial firm Promocom and tradition of International trade fairs in Monaco. In 1988 he became the youngest member of the National Council, and since 2003 is the Chairman of this prestigious institution. In 1999 he became a Knight of St. Karl order and promoted to the officer. He is a member of Board of directors of the Prince Albert II. Foundation since 2007. In 2010 he was appointed as a member of the Government for Social Affairs and Health in the Principality of Monaco. He met with Dušan Kollár in 1998 and the result of their joint activities was Slovak pavilion in the 11th International trade fair of Monaco. He has taken membership in the club on the occasion of the first visit HM Prince Albert II. in Bratislava.

Stéphane Valeri – an honorary member of the club S.A.M.C.

Cristina Noghés Menio was born on third December 1964 in Turin (Italy). She has Italian and Monaco nationality. She completed secondary education in Monaco and later studied at the Law Faculty in Nice. In 1986 she married Lionel Noghés Menio and has a daughter Jessika. She is the owner of estate agency Agence Elite International, a member of the Administrative Council of the Red Cross in Monaco and a member of the Administrative Council of International School in Monaco. Since 1994, she is a member of the Administrative Council of the Monaco Association of fight against sudden death and the President of the Association’s friends of new National Museum in Monaco. She is the Honorary Consul of Slovak Republic in the Principality of Monaco based in Monaco from 14th December 1994. HE Cristina Noghés-Menio assisted in implementing of all our projects in the territory of Monaco and was present at all Association Spectrum ART exhibitions. She has already visited Bratislava and Slovakia many times and is a great admirer of Slovak country and culture. Ms Cristina Noghes-Menio suddenly died in year 2013. Honor her memory!

Jozef Klimko – an honorary member of the club S.A.M.C.

He was born in 1942 in Prievidza, where he finished also secondary school. From 1960 to 1965 he studied at the Law Faculty of Comenius University. He is a Slovak lawyer, teacher, works on the Department of Law History of Law Faculty of Comenius University in Bratislava. In 1969 he studied in Würzburg. In 1975, he did archival research at the Sorbonne University about Paris Peace Conference of 1919. He was inaugurated as a professor in 1991. He was a Vice-Dean of Pedagogical Faculty of Comenius University in the years 1994-1998 and an ambassador in Austria in 1994-1998. Later he worked on the Ministry of Foreign Affairs and until 2007 as Ambassador Extraordinary and Plenipotentiary of Slovakia in Austria. Ambassador extraordinary HE Jozef Klimko as a club honorary member, helps the community as an experienced senior diplomat.